Following new analysis, which looks at variations in outcomes across 171 local authorities in England and Wales, Carterwood Director, Ben Hartley, explains the main findings of the research and attempts to draw some initial conclusions.

Since the beginning of the pandemic, we have scrutinised what has been happening in our sector and have published two recent articles on key data such as excess death rates and predicted recovery in occupancy levels.

As always, we need to say that statistical analysis can appear insensitive at a deeply distressing and emotional time for those directly affected by what has happened. But we hope our work is iterative and that it will contribute to longer-term informed debate and reflection, which is so needed.

Our latest work looks at spatial variations of recorded COVID related deaths in care homes for the elderly in England and Wales. The aim was to see if there was a variation in mortality rates across areas which could not be explained by natural and unavoidable variability in the observed data.

Three datasets have been used in this early stage of the analysis which are as follows:

The research was led by Andrew Whyte (Senior Analyst) and supported by Nick Evans (Data Engineer). They deserve enormous credit for their tenacity and hard work in putting this robust research together.

Read on to find out what we discovered, and if you’d like to discuss our findings or get a copy of the research in PDF form, please get in touch with Tom Hartley (Director) on tom.hartley@carterwood.co.uk or 08458 690777.

Of the five local authorities with the lowest numbers of deaths per thousand, three are in Wales – Ceredigion (0), Anglesey (4) and Gwynedd (5). The other two are North East Lincolnshire (4) and Bracknell Forest (5). 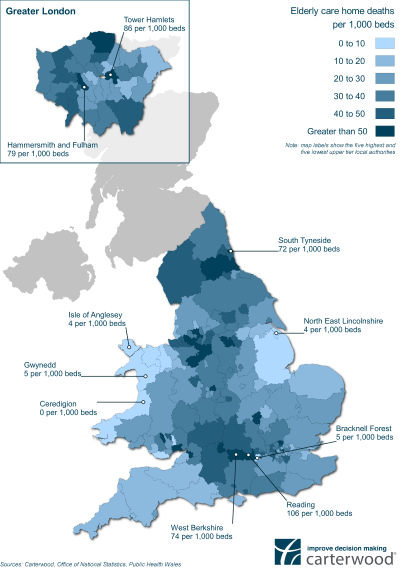 Impact of COVID-19 relative to number of cases

To dig deeper into these numbers, Andy and Nick developed a multiple linear regression model that calculated predicted COVID-19 care home deaths when the number of lab-confirmed cases of COVID-19 in the local population is taken into account. This enabled a comparison between this figure and the actual deaths reported, highlighting local authorities where care homes have experienced significantly higher or lower mortalities than we would expect. 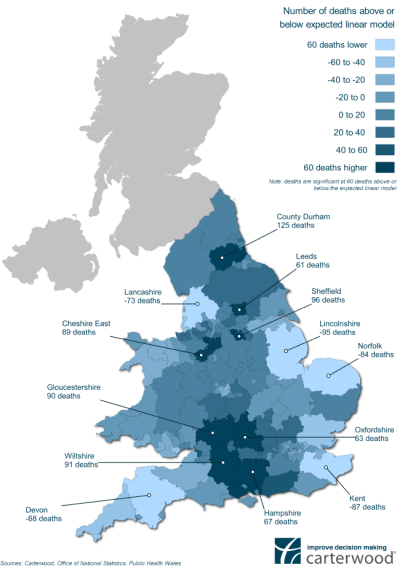 Interestingly, the five local authorities we identified in the first section of this article as having the highest mortality rates per 1,000 beds (Reading (106), Tower Hamlets (86), Hammersmith & Fulham (79), Berkshire (74) and South Tyneside (72)), have actually been impacted in line with our model’s expectations given the prevalence of COVID-19 in the general populations of those local authorities.

It’s clear that a diverse range of factors affect the impact of COVID-19 on care homes in any given local authority. At this stage we lack the granularity of data to be able to suggest definitive conclusions on why one authority might have been affected more than another. However, it is likely that the following factors, among others, played a part:

I have already made the point that we should not jump to any hasty conclusions but there are some points worth pondering.

The impact of COVID deaths seems to be partly driven by the issue of accessibility, not just population density. Coastal areas and the remote fringes have been relatively unaffected.

London has been significantly impacted at an absolute level and has two of the highest rates of deaths per 1,000 beds of all authorities assessed. But, relative to the prevalence of COVID-19 in its population base, it has actually been affected in-line with what our model would expect .

The country is split into three broad bands in terms of COVID impact. The east and west have been relatively unaffected but the middle band has taken the brunt both absolutely and relatively.

There are also some questions about the rural / urban assumption (i.e. that COVID is more prevalent in urban areas). Relatively speaking the “rural” counties of Wiltshire, Gloucestershire, Oxfordshire and Hampshire have fared significantly worse than they should have done. But major urban centres of the north such as Manchester, Leeds and Sheffield have also fared badly, both in absolute and relative terms, and these have very high population densities.

COVID is fundamentally a binary equation — care homes either have cases or they don’t. The bulk of care home deaths occurred in the early part of the process following NHS discharges without testing. When delayed discharge data is released, this will provide further insight into mapping if these discharges correlated and help to explain some of these anomalies.

Time, as always, the enemy in a crisis will ultimately serve us up with a up a clearer picture.

If you’d like to discuss our findings or get a copy of the research in PDF form, please get in touch with Tom Hartley (Director) on tom.hartley@carterwood.co.uk or 08458 690777.

Workings in the margins!

The total number of elderly care home beds was taken from Carterwood’s core data, which we routinely maintain.
We then added together publicly available data from the Office for National Statistics (ONS), dealing with the number of deaths in care homes from 10 April to 29 May across 149 local authorities, to similar data from the Welsh Government in the same period across 22 authorities.

Data on cases of COVID was collected from ONS for England and Public Health Wales (PHW) for Wales.

We assumed that care homes were operating at 87.3 per cent occupancy rates across England and Wales.

The ONS data does not distinguish between age and local authority combined and so we applied a single national elderly-adjustment to both Wales and England.

It is highly probable that a range of variables are at play when assessing the mortality rates, and so it should not be interpreted that outliers in this study are performing worse or better through fault of their own actions. Of course, neither should that be assumed not to be the case.

We used a funnel plot to visually show the clear variation by local authority and to indicate possible outliers. This technique is used extensively in the literature for examining multiple health authorities or institutions.

Alongside the funnel plot, we used a multiple linear regression model. This helped answer the question of which local authority mortality rates were better or worse than would be expected, given the two predictor variables – cumulative laboratory confirmed cases in the entire population and the total number of elderly care home beds at 87.3% occupancy. 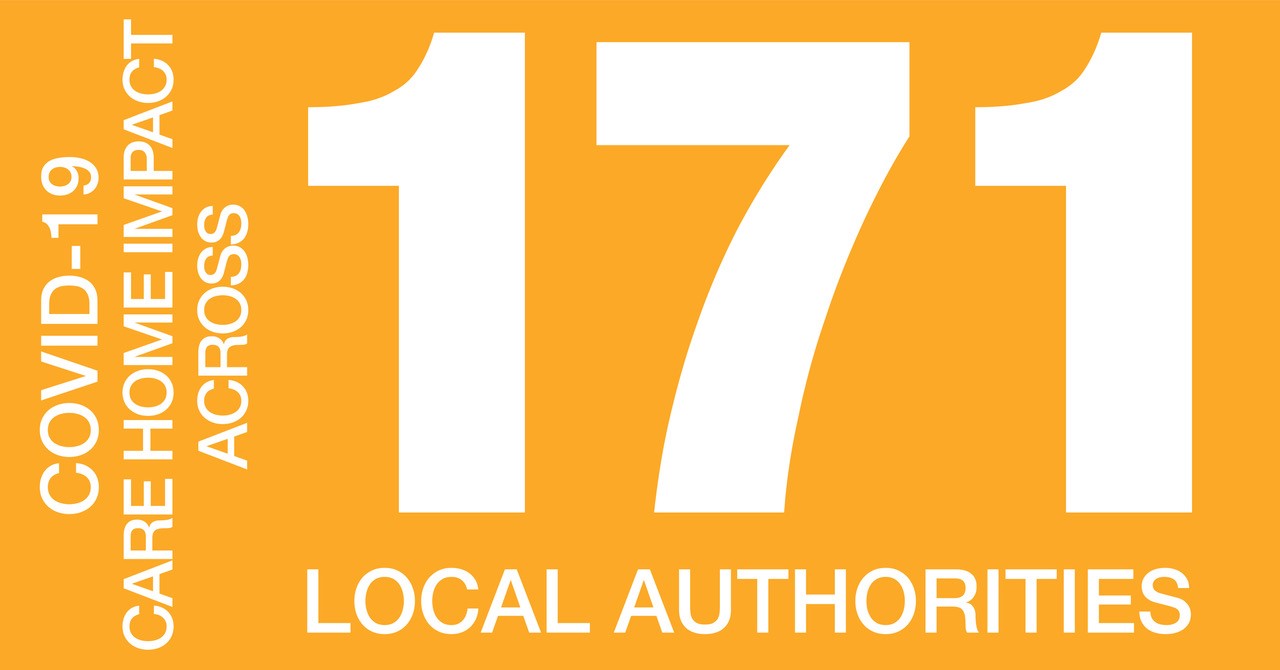 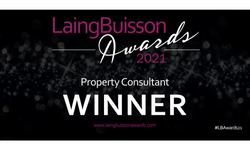 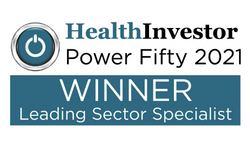